History of the Institute of Psychology - Faculty of Philosophy 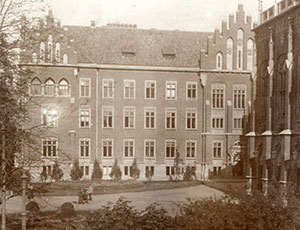 When the Krakow University was founded in 1364, one of its major goals was to educate the intellectual elite that would help the king in building a centralized state after many years of fragmentation of the Polish realm. Hence, the priority was to create a strong Faculty of Law. It consisted of eight chairs, whereas the Faculty of Medicine had only two chairs, and philosophy was taught by a single scholar: the rector of St Mary's School which played the role of the Faculty of the Liberal Arts.

After its revival in 1400, the Krakow Academy consisted of four faculties: of the liberal arts, theology, medicine and law. In this early period, the Faculty of the Liberal Arts dealt with all the disciplines which are now considered humanities and sciences. Only after graduating from this Faculty, the students were allowed to study at one of the three other faculties.

Until as late as the early 18th century, philosophy at Krakow Academy was taught according to the old scholastic model. New European trends, such as e.g. Bacon's and Descartes' conceptions, were generally unwelcome here, and the lectures on philosophy were, to a large extent, limited to commenting on Aristotle. Even the groundbreaking Kołłątaj's reform changed relatively little in this respect: there was only one chair in philosophy at the Jagiellonian University, and it attracted few candidates. The innovative initiatives of Feliks Jarosiński were rejected, and their author was expelled from the University. However, the actions of his successors, Józef Emanuel Jankowski and Józef Kremer, stimulated interest in the philosophical thought of Kant and Hegel. It was also then, when Michał Wiszniewski initiated studies in the philosophy of common sense. Besides, the Jagiellonian University scholars from that period wrote many important works on the history of philosophy.

As far as psychology is concerned, it has been present at the Krakow Academy for many centuries as an object of interest of philosophy. It became a separate field of study in 19th century, thanks to the lectures of Rev. Feliks Jaroński, a philosopher and a theologian. In the modern sense of the word, psychology was introduced at the Jagiellonian University by Prof. Władysław Heinrich, who, at the beginning of the 20th century, gave lectures and ran the internationally famous Laboratory of Experimental Psychology. His actions resulted in the foundation of the Chair in Pedagogical Psychology headed by Prof. Stefan Szuman. In 1956 psychology became a separate programme of study, and in 1968 the Institute of Psychology was founded.

At present, the Institute of Psychology consists of seven departments and three centers. The research is focused on such issues as, inter alia: personality, cognitive processes, development mechanisms, language, creativity, intelligence, stress, and child development.